Starting a journey that takes us abroad can bring with it a myriad of emotions and no experience is ever the same.  But there is one common thread that binds us all together and that is being exposed to new cultures, the one of our newly adopted country, as well as those of our fellow expats who come from all over the world.

When I first moved to Geneva over 13 years ago, I had already spent time living in France and Spain and had travelled extensively, so I didn’t consider myself a novice to experiencing new cultures.  Yet even then I still made my fair share of ‘faux pas’.  If I needed assistance in a shop for example I would start my sentence as politely as possible with ‘Excuse me could you tell me….’.

For me it was all about the tone of the voice.  Where I originally come from, you don’t generally need to begin your request with a ‘Good morning’ or ‘Hello’ and if you do, they often look at you as if you were mad as it all seemed like superfluous chat for a Brit in such a situation. You just got straight to the point!  Then there was the time that I was invited to a barbecue in the park with my Swiss friends. I was asked to bring along my own cups and crockery and  without thinking twice about it I dug out my run-of the-mill plastic picnic set.  I was clearly such a heathen, how could anyone drink a good quality glass of wine out of plastic? Looking back on it, they were right.  You can’t get that lovely chink sound when you are bashing your plastic cup up against a wine glass.  Which reminds me in Switzerland, you also need to look at the other person in the eye as you do it.

I am sure that other expats from different cultural backgrounds may not have fallen into the same traps as me but I know from experience that they also have their stories to tell and by listening to their anecdotes you learn more about their cultures too. Some may think that between some nationalities these cultural differences aren’t that big especially if they share the same language. Not true! Let’t take a look at the British and Americans.  Linguistically I’d agree that there isn’t much difference between British and American English apart from the lexicon but that does have an impact on your own use of words. So in time you find yourself talking about elevators and lifts, holidays and vacation interchangeably. Putting the linguistics aside and focusing on British humour, our sarcasm is so often misinterpreted and our comments taken literally by our friends the other side of the pond.  But the beauty is, we are all in the same boat and enjoy the ride, learning from each other along the way.

Is this cultural exchange enriching?  I think so, yes…. it opens our mind and teaches us that there isn’t always just one way of living.  We learn to be more tolerant and accepting of each other and at times not merely embracing the different cultures but incorporating elements in our own lives.  As a result, we no longer represent one single individual culture but are made up of many different layers.

This enlightenment is all well and good but if you end up being repatriated to your country of origin, how do you just slot back into your old life?  You are different, you have changed even if it’s on a sub-conscious level.  Not only have you moved on, so have your family and friends and quite possibly the country itself, something that you may have missed during those trips back home during the holidays when everyone is on cloud nine. The reality is that both they and the country you saw as home aren’t the same any more.  You are experiencing what is referred to as a reverse culture shock.

A phenomenon of this kind was addressed as far back as 1963 by two sociologists; Gullahorn  and Gullahorn who drew up the W-curve model, one of the most widely known models of culture shock. The W shape represents the fluctuation of people’s emotions when adapting to a new culture and then when re-adapting to their home culture.  It was an extension of the U curve model created by the sociologist Sverre Lysgaard in 1955, but goes one stage further by acknowledging the challenges of returning home. 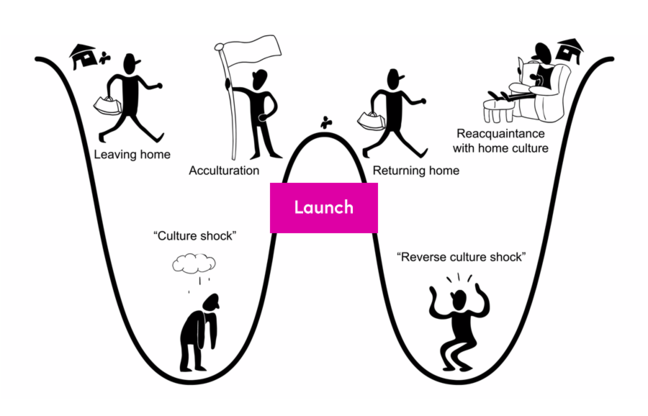 Far too often we speak about preparing ourselves for a move abroad but the idea of a possible reverse culture shock doesn’t even cross our minds.  Suddenly when back at home you find yourself faced with being greeted with a strange look when you say ‘hello’ to an employee at your local bank, or finding your family and friends rude for not taking the time to look you in the eyes when you raise a toast together or even being perceived as pretentious when you start using American words and maybe French words as you can’t remember the English ones… Need I go on?  I am sure that many of you can identify with these situations in some way or another.

It doesn’t mean that the experience wasn’t worth it and that it was all a mistake. Change can be good thing. We are simply evolving like life itself. We just need to be prepared for what that change means in our lives if we decide to repatriate so that we are ready to embrace it in a positive way.

Here at the helpful company, a boutique relocation and consultancy company in Geneva and its surrounding area, we recognize the importance of also preparing you for repatriation, making sure that you are fully equipped to deal with that reverse culture shock phenomenon.